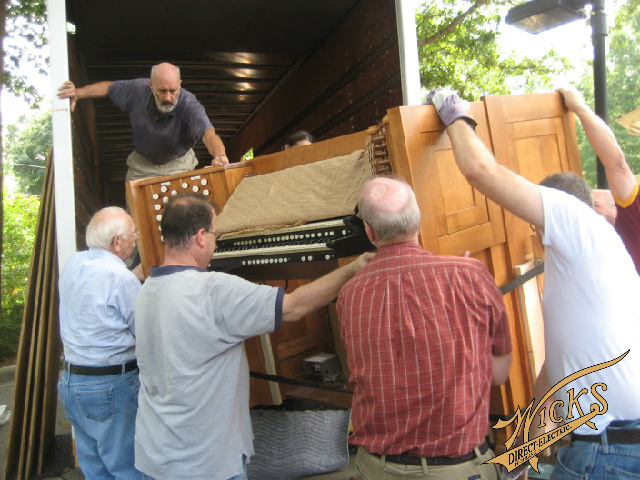 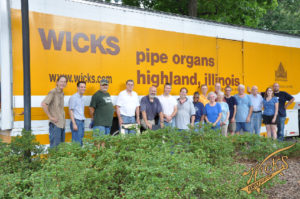 It’s always nice to hear from the friends we’ve made over the past 100+ years, and hear how our “children” have been getting on. Bill Easter is one such friend, and Opus 6475 installed at White Plains United Methodist Church in Cary, NC (2013) Is one such child. A very special child (Not that we pick favorites!!).

Bill, whom served as Organ Committee chair, was gracious enough to reminisce, and share of his experience working with the much smaller downsized Wicks Organ Co, and the instrument we gave birth to way out here in rural Highland, IL.  In turn, we share it with you. 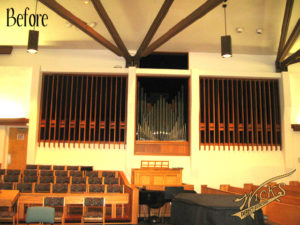 -“When our ageing three-manual, 18-rank Austin pipe organ became unreliable, we found that an overhaul would be prohibitively expensive even without providing any tonal enhancement. We began discussions with six pipe organ builders about a totally new instrument. Their proposals exceeded what we considered a reasonable budget, and we focused on three of the builders, requesting proposals that would reuse our existing pipes as a part of an otherwise new instrument. We also asked them to recommend additional ranks that they deemed necessary to fill out the instrument’s specifications.

We visited several organs in North Carolina built by these companies and ultimately selected Wicks Pipe Organ Company as the preferred builder. Our reasons for choosing Wicks was that we loved the rich, sonorous sound of their instruments, and they offered what we considered a reasonable price. We also liked their unique direct-electric action. Further, they were able to design an instrument that would fit in our existing three-chambers, thus saving us the cost of expensive building modifications. 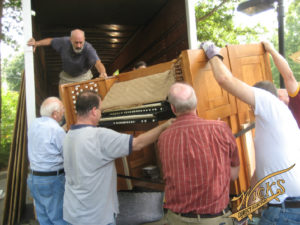 We eventually contracted with Wicks to build an instrument of 45 ranks, 28 of which were to  be pipe and 17 digital. We initially considered digital ranks just to provide additional pedal stops, for which we had no room in the existing chambers. We soon found that we could enhance the core pipe sound with additional digital stops at minimal additional cost. The digital stops provide some niceties that we could never have afforded with pipes. 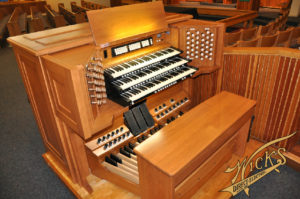 From the beginning, Wicks showed that they intended to provide a high-quality instrument with superior sound. Their designer worked with us closely throughout the project, recommending modifications to the original plan as they analyzed the sound of the original pipes and found ways to use them more effectively. Perhaps the most difficult decision that had to be made was the design of the pipe facade. The Austin organ had exposed pipes in the center chamber only, but we wanted a full display across the three divisions. We looked at various more-or-less traditional pipe configurations, but nothing seemed to work well with our relatively contemporary sanctuary. Taking a cue from our abstract, faced staned-glass windows, the designer was able to fashion a flowing, undulating pipe arrangement, vaguely reminiscent of the mountain ranges in western North Carolina. 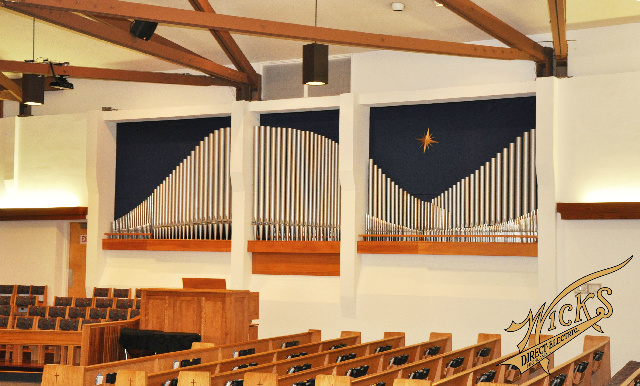 The structural and winding portions of the instrument were constructed with excellent quality seasoned wood, and the distributed windchests and regulators offer tremendous impovement over the Austin’s universal windchest. It shows quality throughout. We are extremely well pleased with the new swell shades, which feature horizontal sections over the conventional vertical groups.

We are thrilled with the finished instrument, both in sound and functionality., and we look forward to many years of its leading us beautifully in traditional worship.”-

We are sure there was question in the organ industry after our downsizing, rather or not we would be capable of carrying on the traditions we had built up and practiced since opening our doors in 1906. “The Proof Is In The Puddin” as they say. Opus 6475 was our first post downsizing instrument, others have since followed.

Thank you again Bill, and to the entire congregation at White Plains United Methodist Church for placing your faith in us. It was a special (and emotional) moment for all of us at Wicks when 6475 first exhaled, and shared its music for the first time in its new home. You will all have a special place in our memory book!

Contact us and find out what we may be able to do for you, you may be surprised.